In all stories of good and evil there must be a villain. Standing here in the dust of the auction arena the villain is illusive. It would be all too easy to cast the ‘meat buyer’ into this role as he sits there with his long list of potential meat purchases. His semi-truck and trailer already backed up to the ramp and the adjacent paddock where his goods of the night will wait to be herded into the darkness with a one way ticket to hell with death as the only escape.

It would be all too easy to blame the meat buyer but he didn't bring these horses here. He didn’t bred them in hopes of winning a race and then discard them when they didn’t. He did not produce drugs made from a pregnant mare while discarding the foals. He didn't buy too many horses without the funds to care for them and he isn't the one who neglected them and then casually brought them here with no feeling of responsibility for their fate. He isn't the one who had years of loyal service from a horse only to send it off in its old age after its use, like sand in an hourglass, had run out.

Still, at best he embodies the Grim Reaper of horses.

There is one horse that is on his list and ours. Number 182. We first saw Number 182 standing quietly in the first pen on the left. She was with other Thoroughbreds and a cheeky little pony. She had a 2 year old best buddy but she showed an interest in all of her new stall mates. She is about 15.2, a rich Bay with a white sock and a pretty little head, soft and intelligent eyes. She seemed happy to meet any human that reached out to her. She has a tattoo on the inside of her lip so we knew that she has seen a race track.

I am quickly told that the whole lot of them in that pen would go to slaughter. Thoroughbreds are not a favorite among a crowd of backyard owners, horse traders and trail riders.

Moving along the pens in search of prospects for our list, we found numerous racking horses, cribbers and horses that appeared suspiciously drowsy.  After hours of watching more than 50 horses unload from trailers, and being ridden, we chose Number 182, a 7 year old Palomino Mare and a greyish Paint and a Polo pony for the finals on our list.

Now the moment that we had prepared for, for over a year had finally arrived. We headed into the arena and stood inside the dusty space for a ‘close enough to touch’ view of where the horses are brought in front of the crowd and auctioned off.

The first few passed through. Some of the better looking riding horses went to individuals or horse traders. Some did not. The unridden, unwanted, unpopular or flawed, sadly were bought by the meat buyer and left the arena for his holding pen on the right side of the aisle. Halters and lead ropes were removed as they will no longer be needed.

The Paint on our list came through. She was well received and found a home with a decent looking owner. The Palomino escaped the grasp of the meat buyer and the Polo pony found a spot on the back of our trailer.  After watching her ridden by several kids for more than 2 hours we felt that we could find a good future for her at our barn.

Then, she walked into the arena and at first I didn't recognize her. The young thin off the track Thoroughbred, now carried a western saddle and a cowboy. The Grim Reaper cast his eyes first to his list and then onto her and opened the bid with a shout of “$130”.  The bid hung in the air and while the auctioneer kept up his steady chatter, the crowd sat still and silent. There were no other takers. We countered, “$150.” The auctioneer directed his attention and encouragement back to the Grim Reaper,” $225, $200, will you give $200?” In a quick moment he gave a stony faced nod and it was back to us. For him it’s a number, a weight and a profit. For us a life hangs in the balance.  Rapid fire chanting from the auctioneer was directed at us in this battle of bids to seal the fate of one single horse. “$225?  $225? $225? Will you give $225???”  A nod from us, followed by a dramatic pause and in the moment before the auctioneer’s hammer falls, I held my breath.  The hammer’s thud breaks the pause and one single life changing word, rings out in the air, ‘Sold!’  .

The Grim Reaper casually ticks her number off his list and number 182 leaves the auction arena, heads down the aisle, passes the meat buyers holding pen and his waiting trailer and keeps right on walking out of that auction barn and into loving arms.

In stories of good and evil, grim reapers, hope and heartache we must dwell on the good. Number 182 now has a chance at a long and comfortable life. She has a team who is dedicated to her rehabilitation so that she will have value and will never be discarded again.

We must dwell on the good of every responsible horse owner who never lets their horse go down this road. Who addresses their horses training problems and who is sure they can provide before they buy.  Who refrains from breeding more unwanted horses.  Who tends their horse companion in sickness even when they outlive their usefulness and strokes their forehead through their last breaths.

This is the good we all do, that we don't even know we do. 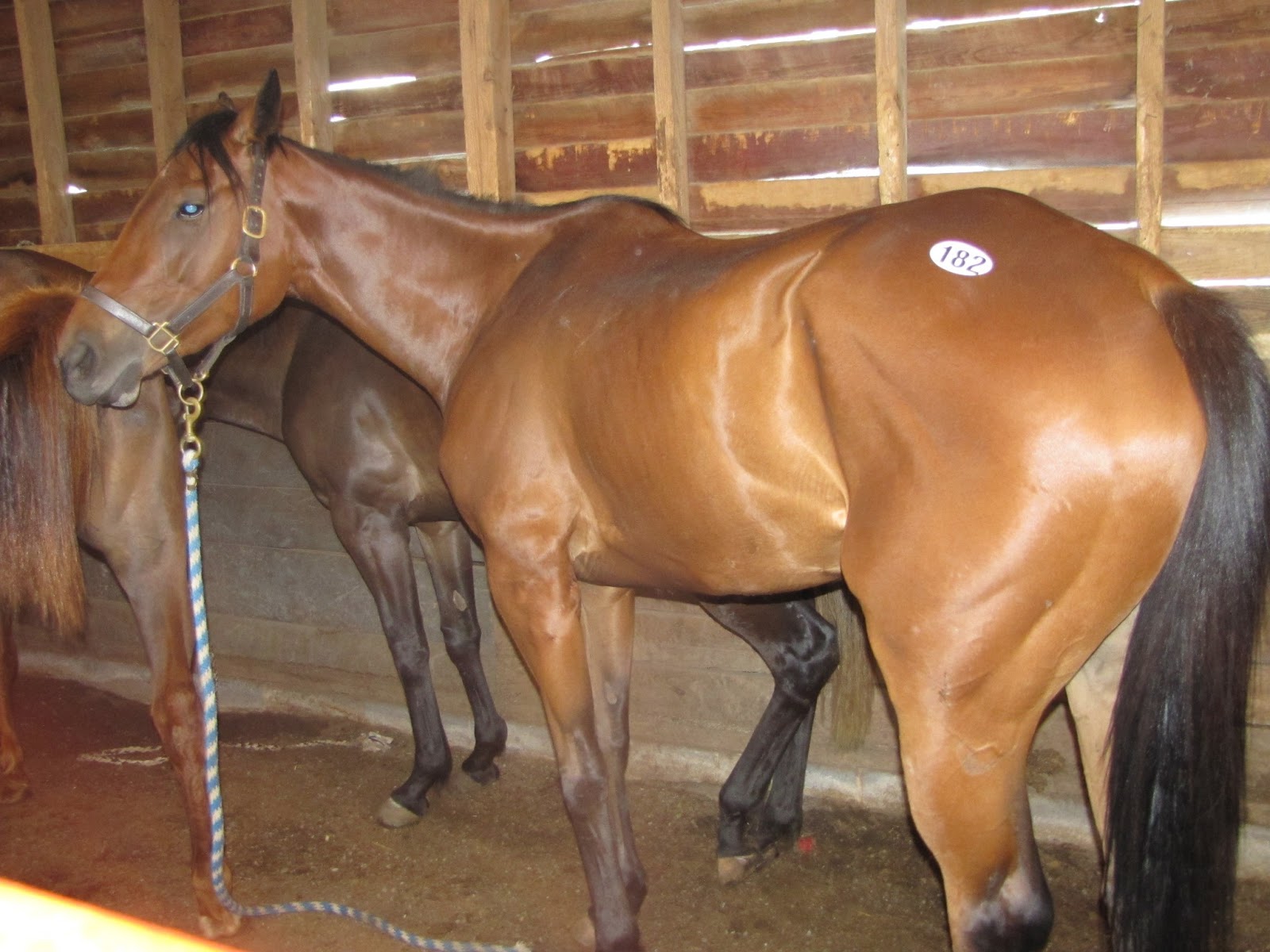